It was Heaven on Earth

Professors of the Moscow Theological Academy Archpriest Maxim Kozlov and Alexei Nikolaevich Svetozarsky shared their stories, remembrances and understandings of Paschal nights and services 35 years ago in the Soviet Union, with Tatiana’s Day.  The OCN is pleased to share these moving remembrances and understandings of what it means to be a Christian from Pravoslavie.ru.  Pravoslavie.ru appears online in several languages.  The OCN has formed a strategic partnership with Pravoslavie.ru whereby content from each organization is shared online by both.  We are delighted to bring you articles, videos and other offerings from Pravoslavie.ru here at myocn.net.

Today, after the church has been cordoned off, traffic will stop, the procession of the cross will start shortly and vehicles will have to go around the church. Thirty-five to forty years ago, during the Soviet era, the police put cordons around churches to keep out the faithful. Even those who managed to break through them couldn’t receive Communion at the midnight service.

Professors of the Moscow Theological Academy Archpriest Maxim Kozlov and Alexei Nikolaevich Svetozarsky spoke in this interview for Tatiana’s Day about the fears and joys of the Paschal nights of thirty-five to forty years ago, the “springtime cakes,” and “Saturday community unpaid cleaning days” (in Russian: subbotniki).

Alexei Svetozarsky: If you wanted to get into a church before the Paschal service you had to fool the so-called “public order volunteers,” or “police helpers” (in Russian: druzhinniki), who in fact were workers of the Komsomol District Committee. One year I noticed that they had special Komsomol membership badges with gold-colored branchlets—the so-called “Lenin badges”. Ordinary people did not have these—they were distinctive marks of being an activist, a professional Komsomol worker.

You needed to walk past them with unfaltering steps, pretending to be going past the church, and then right near the fence abruptly turn into the gate and dart through. It should be said that this was rather easy, and they did not throw their weight about on the church’s territory—it seemed they followed somebody’s directions. They certainly did not disturb anyone inside the church, but in the courtyard they would start barking: “We will show you a work-off!” But these were empty words as they had other events planned after that. They celebrated the feast in their own manner, too, and did it in a big way. 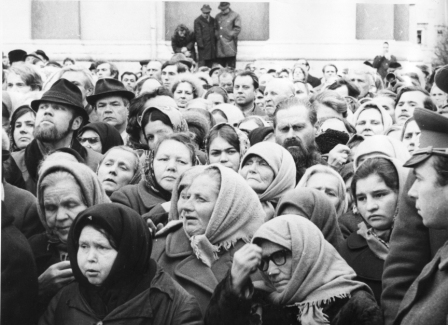 Those supervising worshippers, the 1970s.

Or we could lull their vigilance by walking down a lane (as a rule Moscow churches were built in lanes), making them believe—whistling and looking in every direction—that we were just strolling about. And we needed to do it at ten or even nine in the evening because at eleven you didn’t have access to the church. But if a priest knew you well, he could come to the cordons and ask them to let you pass—then they would let you in.

“One bitter moment stuck in my memory. I was at one parish church on Pascha; it was the time when I became aware that I was a Christian. Perhaps I was still uncomprehending and inexperienced, but by that time I had entered into Church life, I felt a sense of belonging and unity of people who gathered at church. I was astonished that a local priest refused to help my friends through the cordon. I reached the church’s courtyard, while my companions were standing behind—they had lingered and thus were late. There were only two of them, but they came there not just to stare at others… And they were not let in. So I managed to go through the line and asked the priest to help me, taking his blessing. But the latter refused: “Yes, I see that you are from our parish, but I don’t know who those guys are. I am in charge of my own parishioners only,” he said. It was very disappointing, although now I understand that priest very well.

Archpriest Maxim Kozlov: When they did not let you in they explained it by the fact that a large number of odd idlers were walking around, and it was the task of the public order volunteers to protect us from these gawkers and hooligans. But in reality their aim was to deny young people access to church. That is why it was necessary for young believers not to be timid and confused. They were to walk very confidently, demonstrating that they knew perfectly well where they were going.” 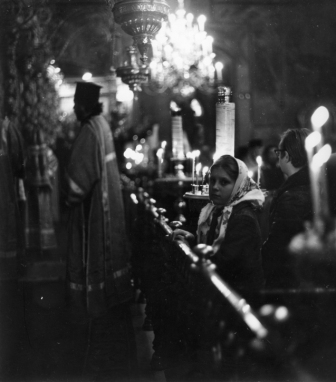 Prof. A.S.: I remember the courtyard of St. Pimen’s Church, nine in the evening: The Book of Acts was being read. I could come in and listen, but realize that the whole night with the Paschal service is ahead of me and go out to a narrow courtyard. It is warm, late April or early May. All are waiting for this holy day and you are in good spirits. You have nowhere to sit down because all of two or three benches are occupied. You are standing and looking at people. You have no contact with them; it was a church where believers from a number of Moscow’s bedroom neighborhoods would come, and people communicated with each other very little. Of course, there was one circle of friends, but I did not belong to it. Those guys are drawing near, with Komsomol membership badges on the lapels of their jackets and the, “Public order volunteer” bands on their arms. “What are you doing here?” They ask.

“I have come to the church for a service.”

(They could not do you any harm in the yard but could come up and talk).

“Really? It is Interesting? And where do you study?”

“It’s not your business,” I reply, at the same time worrying not so much about myself as about my parents, because I could greatly distress them, to put it mildly. But I was a hotheaded youth and could not back down. And they promise: “We will wait till the end of the service all the same.” True, the festivities sometimes were overshadowed, but these police helpers never waited until the end of the service.

Later, when I became an adult, I would go for Paschal services to the Church of St. Elias the Prophet in Obydensky Lane. Of course, deepest gratitude and eternal memory to its priests—Father Alexander Yegorov, Father Peter Dyachenko and all the pastors who gave us spiritual guidance at that period. Then the rector of this church was a wonderful priest—Archpriest Nicholas Tikhomirov. He was one of the first priests I began to communicate with, and he devoted more attention to me and showed his concern. 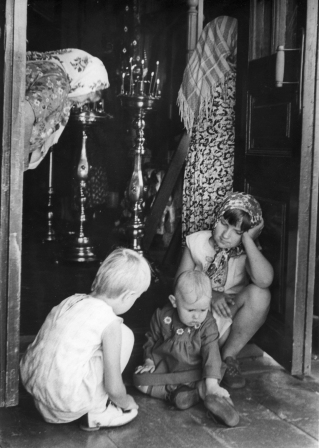 Go and Make Disciples: Evangelization and Outreach in US Orthodox Parishes