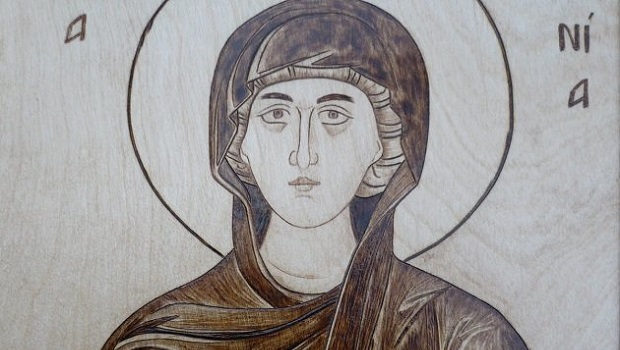 Today we celebrate the memory of a great saint, the holy blessed virgin martyr Evyenia. She lived at the time of Decius, in the mid-third century, in Old Rome, the great world power of the time. Old Rome, because later came New Rome, Constantinople, which is why the Life makes the distinction, even though it had not yet occurred. Her parents were pagan but good-hearted and charitable people, and Evyenia was a good offshoot of theirs. She wasn’t Christian, but she had a Christian and kindly soul.

Her parents left Rome when the emperor sent her father, Philippos, to be governor of Alexandria, in the glorious city founded by Alexander the Great. Literature, the arts, culture and much else flourished there. Evyenia was fond of letters and philosophy and the arts, so she studied Greek and Latin literature, philosophy and other subjects. She had a bright future before her.

But one evening, while she was in the house of her father, the governor, she was struck with illumination and a celestial will came upon her. She dressed as a man, and left the house in secret, with her two favourite handmaidens. She went to the bishop and told him: “I want to leave, I want to become Christian and I want to enter a monastery”. He sent her to a monastery where she was baptized, with the name of Evyenios, which means a person of good family. As she was named, so she was in fact.

She made such great progress in the monastery that she surpassed young and old alike. And her manner was just as it should be: great humility, much love, intelligence and prudence. Everyone was proud of her, everyone wanted this humble, loving person. Isaak the Syrian says that a humble person has nowhere to fall because they’re already below everybody and everything.

The abbot died and the eyes of all were turned upon Evyenia/Evyenios. “You’ll do for abbot”, they said over and over again, and, because this is what God wanted, Evyenios did, indeed, become the abbot. “Who will find a virtuous woman. She is more precious than jewels” says the great Solomon, who knew a thing or two about women. S(he) became abbot and contributed much. She was greatly loved by one and all, and people came from miles around to receive her blessing. The devil envied her, however, and a woman came to her who was a vessel of Satan.

She asked for help she didn’t need and tried to drag the abbot, that is Evyenia, into debauchery and sin. She said to her “I’ve got a pain in my stomach and I’d like you to take a look at it and make the sign of the cross over it”. The Evil One thinks of everything, and Evyenia, being a good person agreed to help. But then the other woman showed herself for what she was and what she wanted. Evyenia realized what she was about and (“Who will find a virtuous woman”) bridled and told her in no uncertain terms to be on her way before she had her thrown out. But the woman had her revenge: she wrote a note to the governor saying that there was this abbot, in such and such monastery, who charmed women with his blandishments but then lead them astray and ruined their lives.

So the governor, who had lost his daughter, received the missive and by divine providence gave orders to have the fathers brought to him in chains, because the woman, whose name was Melanthia, had also accused others monks, besides the abbot. The governor decided to try them himself. He was a good man, but a pagan. The trial began and his wife, children and servants were all present, one large family of righteous people. The time came for the accuser to testify. The things she said about the abbot, and all of them lies. Really terrible lies that might well have convinced people, even the most circumspect.

Abbot Evyenios could bear it no longer and revealed that he was a woman. She stripped from the waist up and said: “This is who Evyenios is. This is the abbot”. And she added. “I wouldn’t have done this, I’d have suffered in silence, but I didn’t want people to scorn the monastic habit, which is that of the angels. The vestment of Christ. This is why I’ve lost the crown: to honour the monastic habit. And the governor, the judge is my own father. Next to him are my mother and siblings. The servants are my friends.” When Philippos heard this, he was shaken to the core and couldn’t even speak for a long time. They condemned the accuser for all her unfounded lies and sent her packing.

Philippos, the governor, the father of Saint Evyenia was baptized, with all his family. And the man positively shone, beamed. Evyenia lived at home with her parents for ten years. Having helped innumerable people in need, Philippos then handed over the reins of power and became bishop in Alexandria. He then contributed even more than he had done as governor. But the pagans, incited by his successor, who was a bad man, attacked the church where he was celebrating one day and murdered him at the altar. He thus became a hieromartyr. Thereafter, Evyenia, her mother, the other children and the servants all left for Rome, for their family home.

Once they got there, they faced new persecution from the next emperors, Gallienus and Aurelian. These had issued such terrible orders that anyone who even admitted to being a Christian or to have given some sign and indicated this allegiance was taken to court and, if they didn’t change, they were despatched to Saint Peter. And so they also had Saint Evyenia brought before them, but she refused to change, as did her mother and siblings. So when they saw her resistance and courage, they subjected her to the greatest punishments and tortures. They tied her to a rock and cast her into the sea, so that she’d disappear, but an angel of the Lord set her free and she rose to the surface and returned to the city, the governor and the rest of them.

The people there were amazed and frightened. They didn’t know what to do. So they cast her into a fiery furnace! But like the Three Children in the Furnace, she emerged safe and sound. Then they threw her into prison and left her to die of starvation- “In hunger and thirst”, as the great Saint Paul would say- but an angel of the Lord brought her food every day. This is divine providence: when we believe, we fear nothing. This is what the saints and martyrs realized when they commended themselves and others unto Christ our God.

When the tormentors realized that they were getting nowhere with Evyenia, they took her out of prison, threatened her and tortured her, but she remained fearless and virtuous. In the end, they beheaded her. And they sent her to be with her hieromartyr father and all the others who abide in the heavenly kingdom. After her, her mother, her siblings and their servants were all martyred.

If you read this text in Greek it is impossible not to notice that the evil woman is called Melanthia. That she existed and did what she did is entirely probable, but the name is slightly suspect in that it seems rather too fitting. It is not a common name at all and has connotations of “black”. Now, if you look up the Minaion for 24 December, there is a charming and, thankfully, unrefined poem of a couple of pages which states: “But Melanthia, who was black of soul…”. But lest we associate “black” with “bad”, the great Solomon, who is mentioned in this text and to whom the Song of Songs is attributed, says (the bride): “I am black and beautiful”. And we shall soon celebrate the memory of Saint Melania (December 31), whose mother was Saint Albina! The Incarnation of God as the Opposite to Today’s Sinfulness