Site of Jesus’ Baptism to be Cleared of Mines, giving access to Orthodox Christians and other Christian Denominations

Under a new agreement between Israeli and Palestinian officials, the site of Jesus’ baptism is to be cleared of mines over the next two years, giving improved access to churches and monasteries for pilgrims from eight Christian denominations, including Orthodox Christians.

By Rory Jones in the Wall Street Journal

QASR AL-YAHUD, West Bank—Father Baret Yerezian recalls a time when he didn’t have to walk through a minefield to pray at the traditional site of the baptism of Jesus.

“We would take people, put a small boat in the river and bless them right there in the middle,” said 69-year-old Mr. Yerezian, the director of real estate at the Armenian Patriarchate in Jerusalem. “It was easier then.”

Such free access to the site where St. John the Baptist is said to have baptized Jesus more than 2,000 years ago has been rare in the 50 years since Mr. Yerezian was a teenage clergyman.

Israel wrested control of this West Bank area, known as Qasr al-Yahud, from Jordan in the 1967 war. It then mined the entire site on the banks of the Jordan River to ward off attacks from across the border. But Israel signed a peace treaty with Jordan in 1994 and their border has been relatively quiet for more than 20 years.

Israel cleared a part of the baptismal site in 2011 and it has since become a popular attraction for visiting Christian pilgrims. Now Israeli and Palestinian officials have agreed to allow U.S. and U.K.-based demining group HALO Trust to clear the rest of the site—about 136 acres. HALO and Israeli defense officials estimate the area is littered with more than 3,000 antipersonnel and antitank mines and an unknown number of improvised explosive devices. The plan is to clear all the mines within two years.

To reach their watery destination, pilgrims must pass through a ghost town of churches fenced off by menacing signs that read “Danger! Mines!” On a recent morning, 150 Ethiopian Christians clad in white robes adorned with depictions of Jesus’ baptism waded into the river for a ceremony. The atmosphere was festive as they banged drums, sang in Amharic and splashed in the murky brown waters.

On a wooden platform above the stream, Russian Orthodox Christians waited their turn under the shadow of palm trees. Nearby, a clergyman led another group of Chinese Christians in prayer. A few hundred yards away, an eerie quiet surrounded the old buildings covered by a tangle of thorny bushes, shrubbery and barbed wire.

Abandoned for nearly 50 years, the worn, sandy exterior of an Ethiopian Orthodox church matched the desert landscape. The ground on a Russian plot cracked in the sun. Through a gaping hole in the side of a Romanian church, light shone through a mural of an angel.

Eritrean Christian migrants now living in Israel pray in the waters of the Jordan River at the Qasr al-Yahud baptism site on May 5. PHOTO: HEIDI LEVINE FOR THE WALL STREET JOURNAL

All told, eight Christian denominations will get access to land, five churches and monasteries, and a few outhouses that have lain dormant for almost five decades. More than 300,000 tourists already visit the site each year; officials say they expect that the mine clearance will only boost those numbers, something that could lead to further development in the area.

Palestinian officials generally condemn Israeli development of tourism sites on land that they claim for a future state. But officials say they support the demining of Qasr al-Yahud.

Biblical scholars aren’t all agreed on the exact site of the baptism of Jesus Christ.

The area that lies just a few meters across the river from Qasr al-Yahud on the Jordanian side is also revered by pilgrims, and known in Arabic as al-Maghtas, or baptism. Unesco designates the Jordanian site as its official location for the baptism. Christian pilgrims also revere another believed baptism site, known as Yardenit, which lies at the point the Sea of Galilee in northern Israel flows into the Jordan River.

The Israeli, Palestinian and religious officials involved in the demining project said they hope it will broadcast a message of religious tolerance in the region.

“The most important thing is to again allow the area for pilgrims to pray,” Noel Muscat, the Franciscan Superior of the Church of the Holy Sepulchre in Jerusalem, said at a recent meeting of leaders of all eight denominations involved. 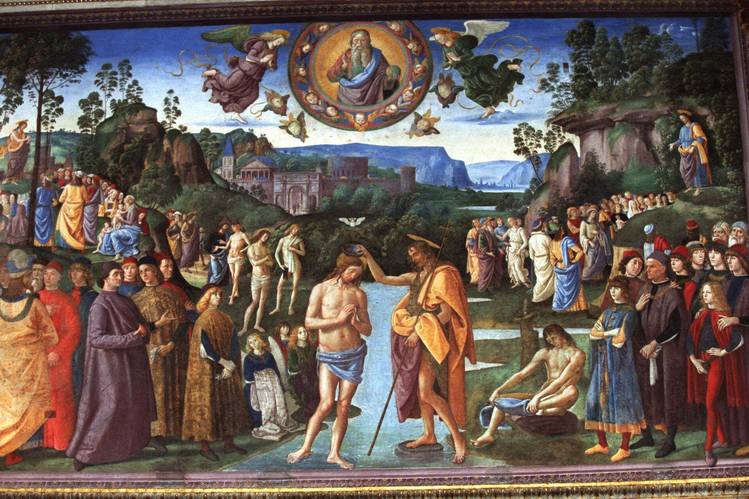 The “Battesimo di Cristo” (The Baptism of Christ) fresco by Pietro Perugino at the Vatican’s Sistine Chapel. PHOTO: ASSOCIATED PRESS

“Eventually, you will be able to walk freely from each church down to the river,” Ronen Shimoni, head of West Bank operations at HALO, said as he walked the area.

The churches and monasteries were largely built in the 1930s during the British Mandate period. The crumbling structures sit in dusty fenced-off yards and are covered in bullet holes—remnants after the 1967 war.

Following skirmishes between Palestine Liberation Organization operatives and the Jordanian army and Israeli soldiers post-1967, Israel also placed antipersonnel mines on the site and booby-traps in the buildings to ensure they couldn’t be used as staging areas for attacks on Israel and Israeli settlements in the West Bank. The area became a buffer zone in fighting between Israeli and Palestinian and Jordanian operatives, said Michael Heiman, technology and standards manager at the Israel National Mine Action Authority which is part of the defense ministry.

Qasr al-Yahud is just one part of more than 35 square miles of land in Israel and the West Bank designated to be cleared of mines. Israeli officials estimate there are more than a million mines predominantly along the Jordanian border and in the Golan Heights, which Israel captured from Syria in the 1967 war.

Some critics have accused the Israeli government of being too slow to clear the mines. In 2010, an 11-year-old boy, Daniel Yuval, lost a leg while playing in the snow with his family in the Golan Heights. The young Mr. Yuval then campaigned to clear Israel of mines.

Write to Rory Jones at rory.jones@wsj.com

Featured Image: Visitors picnic in front of a fence warning of mines at Qasr al-Yahud. HEIDI LEVINE FOR THE WALL STREET JOURNAL

Could Attending Church Services be the Key to a Longer Life?