Listen to the Daily Reading for January 18, 2017, Sts. Athanasios and Cyril, Patriarchs of Alexandria

Brethren, remember your leaders, those who spoke to you the word of God; consider the outcome of their lives, and imitate their faith. Jesus Christ is the same yesterday and today and for ever. Do not be led away by diverse and strange teachings; for it is well that the heart be strengthened by grace, not by foods, which have not benefited their adherents. We have an altar from which those who serve the tent have no right to eat. For the bodies of those animals whose blood is brought into the sanctuary by the high priest as a sacrifice for sin are burned outside the camp. So Jesus also suffered outside the gate in order to sanctify the people through his own blood. Therefore let us go forth to him outside the camp and bear the abuse he endured. For here we have no lasting city, but we seek the city which is to come. Through him then let us continually offer up a sacrifice of praise to God, that is, the fruit of lips that acknowledge his name. Do not neglect to do good and to share what you have, for such sacrifices are pleasing to God.

The Lord said to his disciples, “You are the light of the world. A city set on a hill cannot be hid. Nor do men light a lamp and put it under a bushel, but on a stand, and it gives light to all in the house. Let your light so shine before men, that they may see your good works and give glory to your Father who is in heaven. Think not that I have come to abolish the law and the prophets; I have come not to abolish them but to fulfill them. For truly, I say to you, till heaven and earth pass away, not an iota, not a dot, will pass from the law until all is accomplished. Whoever then relaxes one of the least of these commandments and teaches men so, shall be called least in the kingdom of heaven; but he who does them and teaches them shall be called great in the kingdom of heaven.”

Athanasios and Cyril, Patriarchs of Alexandria

In the half-century after the First Ecumenical Council held in Nicea in 325, if there was one man whom the Arians feared and hated more intensely than any other, as being able to lay bare the whole error of their teaching, and to marshal, even from exile or hiding, the beleaguered forces of the Orthodox, it was Saint Athanasios the Great. This blazing lamp of Orthodoxy, which imperial power and heretics’ plots could not quench when he shone upon the lampstand, nor find when he was hid by the people and monks of Egypt, was born in Alexandria about the year 296. He received an excellent training in Greek letters and especially in the sacred Scriptures, of which he shows an exceptional knowledge in his writings. Even as a young man he had a remarkable depth of theological understanding; he was only about twenty years old when he wrote his treatise “On the Incarnation.” Saint Alexander, the Archbishop of Alexandria, brought him up in piety, ordained him his deacon, and after deposing Arius for his blasphemy against the Divinity of the Son of God, took Athanasios to the First Council in Nicea in 325. Saint Athanasios was to spend the remainder of his life laboring in defense of this Holy Council. In 326, before his death, Alexander appointed Athanasios his successor.

In 325, Arius had been condemned by the Council of Nicea; yet through his hypocritical confession of Orthodox belief, Saint Constantine the Great was persuaded by Arius’s supporters that he should be received back into the communion of the Church. But Athanasios, knowing well the perverseness of his mind, and the disease of heresy lurking in his heart, refused communion with Arius. The heresiarch’s followers then began framing false charges against Athanasios. Finally Saint Constantine the Great, misled by grave charges of the Saint’s misconduct (which were completely false), had him exiled to Tiberius (Treves) in Gaul in 336. When Saint Constantine was succeeded by his three sons Constantine II, Constans, and Constantius, in 337, Saint Athanasios returned to Alexandria in triumph. But his enemies found an ally in Constantius, Emperor of the East, and he spent a second exile in Rome. It was ended when Constans prevailed with threats upon his brother Constantius to restore Athanasios (see also Nov. 6). For ten years Saint Athanasios strengthened Orthodoxy throughout Egypt, visiting the whole country and encouraging all: clergy, monastics, and lay folk, being loved by all as a father. After Constans’s death in 350, Constantius became sole Emperor, and Athanasios was again in danger. On the evening of February 8, 356, General Syrianus with more than five thousand soldiers surrounded the church in which Athanasios was serving, and broke open the doors. Athanasios’s clergy begged him to leave, but the good shepherd commanded that all the flock should withdraw first; and only when he was assured of their safety, he also, protected by divine grace, passed through the midst of the soldiers and disappeared into the deserts of Egypt, where for some six years he eluded the soldiers and spies sent after him.

When Julian the Apostate succeeded Constantius in 361, Athanasios returned again, but only for a few months. Because Athanasios had converted many pagans, and the priests of the idols in Egypt wrote to Julian that if Athanasios remained, idolatry would perish in Egypt, the heathen Emperor ordered not Athanasios’s exile, but his death. Athanasios took a ship up the Nile. When he learned that his imperial pursuers were following him, he had his men turn back, and as his boat passed that of his pursuers, they asked him if he had seen Athanasios. “He is not far,” he answered. After returning to Alexandria for a while, he fled again to the Thebaid until Julian’s death in 363. Saint Athanasios suffered his fifth and last exile under Valens in 365, which only lasted four months because Valens, fearing a sedition among the Egyptians for their beloved Archbishop, revoked his edict in February, 366.

The great Athanasios passed the remaining seven years of his life in peace. Of his fifty-seven years as Patriarch, he had spent some seventeen in exiles. Shining from the height of his throne like a radiant evening star, and enlightening the Orthodox with the brilliance of his words for yet a little while, this much-suffering champion inclined toward the sunset of his life, and in the year 373 took his rest from his lengthy sufferings, but not before another luminary of the truth — Basil the Great — had risen in the East, being consecrated Archbishop of Caesarea in 370. Besides all of his other achievements, Saint Athanasios wrote the life of Saint Anthony the Great, with whom he spent time in his youth; ordained Saint Frumentius first Bishop of Ethiopia; and in his Paschal Encyclical for the year 367 set forth the books of the Old and New Testaments accepted by the Church as canonical. Saint Gregory the Theologian, in his “Oration On the Great Athanasios”, said that he was “Angelic in appearance, more angelic in mind; … rebuking with the tenderness of a father, praising with the dignity of a ruler … Everything was harmonious, as an air upon a single lyre, and in the same key; his life, his teaching, his struggles, his dangers, his return, and his conduct after his return … he treated so mildly and gently those who had injured him, that even they themselves, if I may say so, did not find his restoration distasteful.”

Saint Cyril was also from Alexandria, born about the year 376. He was the nephew of Theophilus, Patriarch of Alexandria, who also instructed the Saint in his youth. Having first spent much time with the monks in Nitria, he later became the successor to his uncle’s throne in 412. In 429, when Cyril heard tidings of the teachings of the new Patriarch of Constantinople, Nestorius, he began attempting through private letters to bring Nestorius to renounce his heretical teaching about the Incarnation. When the heresiarch did not repent, Saint Cyril, together with Pope Celestine of Rome, led the Orthodox opposition to his error. Saint Cyril presided over the Third Ecumenical Council of the 200 Holy Fathers in the year 431, who gathered in Ephesus under Saint Theodosius the Younger. At this Council, by his most wise words, he put to shame and convicted the impious doctrine of Nestorius, who, although he was in town, refused to appear before Cyril. Saint Cyril, besides overthrowing the error of Nestorius, has left to the Church full commentaries on the Gospels of Luke and John. Having shepherded the Church of Christ for thirty-two years, he reposed in 444.

Apolytikion of Athanasios and Cyril, Patriarchs of Alexandria

Shining forth with works of Orthodoxy, ye quenched every false belief and teaching and became trophy-bearers and conquerors. And since ye made all things rich and with true piety, greatly adorning the Church with magnificence, Athanasios and wise Cyril, ye both have worthily found Christ God, Who doth grant great mercy unto all.

Kontakion of Athanasios and Cyril, Patriarchs of Alexandria

O great Hierarchs of piety and brave champions of the Church of Christ, you watch over all who sing, “Save us who in faith honor you, O Compassionate.” 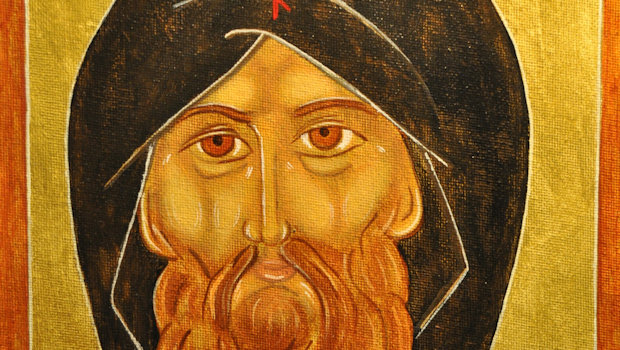 St. Macarius the Great of Egypt