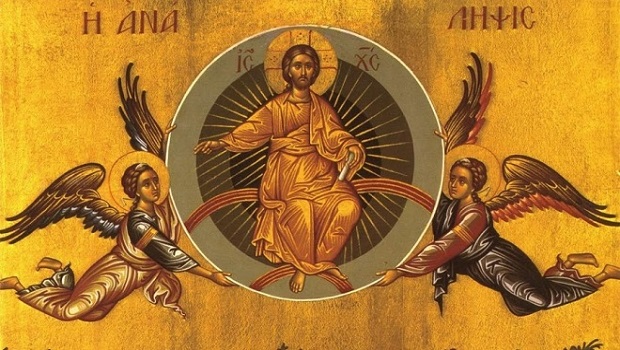 So we have come to the Feast of the Ascension of Our Lord. Thus we have come to the last day of Christ’s physical presence on Earth. This marks the fulfilment of all things, since His Conception at the Annunciation to the Holy Virgin, His Birth and all the events of His earthly life, recorded for us in the Gospels.

Christ came down from Heaven in order to destroy the power of Satan over mankind.

Christ was crucified and rose from the dead in order to destroy death.

Christ ascends into the skies in order to raise up fallen human nature to the heights of Heaven.

We should note, however, that all these victories of Christ over Satan, death and sin are accomplished in humility.

At His Birth there was, as we would say now, no media. All happened in obscurity, lowliness and poverty, as the Saviour of mankind was born in a cave by the ox and the ass.

At His Crucifixion also there was no glory: on the contrary, there was shame, thieves, reviling, mockery, bodily death, a lonely death.

So also at His Ascension the only witnesses were His Mother and the eleven disciples amid the obscure olives groves on the Mount outside the City.

We see that all the great events, all the victories, of the life of Christ were accompanied by humility. This is because in the Church victory is humility. Every act of humility is a victory over the pride of Satan.

And in order to grant us the opportunity for humility, at the last event of His physical presence amongst us, Christ gives us two things:

Firstly, He comforts us and the disciples with the promise of the Holy Spirit at Pentecost, Who will guide us into all truth, into all humility.

When He ascends, He promises us the Holy Spirit.

When He descends at the Second Coming, He will come in glory as the Victor over death to judge all deathly acts, that is, all sins, for as the Apostle writes, the wages of sin are death.

Thus God is victorious in humility.

Therefore the Orthodox Church and faithful Orthodox Christians are also victorious, but only in humility.

God is the Merciful Saviour among us, granting us the Holy Spirit in order to guide us on our path to the victory of humility. As we have sung this day: ‘I am with you and no-one will be against you’.

God is the Righteous Judge among us, granting us His Coming again as the Judge of the Universe, guiding us on our path to the victory of humility: ‘I am with you and no-one will be against you’.

Putting yourself in the place of others