According to the Jewish custom which was observed at the time of Christ, a dead body was to be anointed with precious myrrh, so that it would be prepared to be given over to the decay of death. Christ’s body was no exception to this practice, so a group of women, taking myrrh with them, visited the tomb to perform the duty of every devout Jew to a dead person.

Normally, these honours were paid at the time of the burial and the tomb was then sealed. In the Lord’s case, the anointing didn’t occur at the burial, because any time to do so had already passed, because of the strict observance of the Sabbath, which had begun at the time of the deposition of Christ from the Cross. (This must have happened at about daybreak on the Sabbath). It was therefore impossible to buy the necessities, nor to remain in the neighbourhood of the tomb, which was outside the gates of Jerusalem.

One of the many restrictions which were observed on the Sabbath was that of not walking more than the ‘Sabbath day’s journey’, which, according to one school of legal experts was 1,000 steps (roughly 500 metres) and, according to another 2,000 steps or about a kilometre. This is why the myrrh-bearers managed to buy the myrrh, but didn’t have the chance to visit the tomb, nor, of course, to roll back the stone which blocked the entrance to it.

The only Evangelist who seems to have held to the Jewish system of the division of the parts of the day is Saint Mark. In the passage Mark 16, 1, he says that they bought spices as soon as the Sabbath had ended, that is late in the afternoon of that day and that, on the morning of the first day after the Sabbath, when the day of rest was over, they visited the tomb of the Lord. ‘And when the sabbath was past, Mary Magdalene, and Mary the mother of James, and Salome, bought spices, so that they might go and anoint him. And very early on the first day of the week they went to the tomb when the sun had risen’. No doubt they left their homes while it was still dark and the sun just began to rise as they left the city. In all likelihood this is so because he’s the only one who records an action of the myrrh-bearers inside the city. This action, the purchase of spices, took place in accordance with the Jewish rules for observance of the Sabbath [after sunset].

Saint Luke notes that the deposition from the cross took place very late on Friday, that is, on the morning of the Sabbath, but before the sun had risen, because it was this which marked the beginning of the day of rest (Luke 23, 54), ‘it was the day of Preparation and the Sabbath was about to begin’. So the Evangelist didn’t reckon that the day of rest began on the evening of Friday, but on the morning of Saturday.

The myrrh-bearing women prepared the spices to in order to fulfil their duty to the dead body of the Lord and visited the tomb as soon as the Sabbath rest day was over- very early in the morning, just as the next day, Sunday, was dawning: ‘On the Sabbath they rested according to the commandment, then on the first day of the week, at early dawn, they came to the tomb’ (Luke 23, 56- 24, 1).

Similarly, Saint John the Evangelist also emphasizes that Saint Mary Magdalene ‘came to the tomb while it was still dark and saw the stone taken away from the tomb’ (Jn. 20, 1).

A study of these passages reveals that the women arrived at the tomb very early on Sunday morning, just as soon as they were allowed out of the city. This is according to the Roman system of reckoning days and hours, by which the day began with the rising of the sun. In this system, the day was divided into twelve hours of daylight and twelve of night. Depending on the time of the year and the region of the Roman Empire concerned, there could be considerable differences.

This is how the Evangelists determine the time in their narratives of the passion and the crucifixion:

c) Luke, however, in verse 23, 44, makes no mention of the time when the Lord breathed His last.

d) John has a similar definition of the time in verse 19, 14: ‘it was the preparation for the Passover, about the sixth hour (noon) and [Pilate] said to the Jews…’, the difference being that he provides only the first part of the time frame, starting with the ending of Christ’s trial before Pilate.

According to this reckoning of the time of day, which, we should note, continued to be applied in the Eastern Roman Empire (‘Byzantium’), it would appear that the myrrh-bearing women left their homes after 11 o’clock at night and reached the tomb at about 1 o’clock in the morning, that is towards the end of the 11th hour of the night, or whenever they were allowed to go.

A decisive role in the decision of the Myrrh-Bearers to visit the grave early in the morning rather than on the afternoon of the Sabbath- and also in the use by the Evangelists of the Roman division of the day- was clearly played by the fact that the place of the crucifixion and the location of the tomb were outside the gates of Jerusalem. In the evening, at sunset, as in all the cities of the ancient world, the gates closed and were opened again at dawn. At that time in particular, with thousands of Jewish pilgrims and the Roman governor, Pontius Pilate, in the city, security measures would have been extremely strict and the guards would have been on high alert.

Since the deposition from the cross and the swift burial took place with Pilate’s permission, it was possible for those who took part in these actions to remain outside the gates after sunset. So the timetable of events regarding the movements of the disciples and the women, as recorded by the Gospel writers, should be reckoned in accordance with the Roman system of dividing the day, not the Jewish method.

Visit MyOCN for access to live streaming services around the world, on Sunday and throughout the week.
https://myocn.net/live-streaming-orthodox-church-services-around-the-world/

Saint John Chrysostom This is the same Holy Spirit Who preached by the prophets, Who gave understanding to the Apostles, Who spoke to people. He was given to them by the Lord, and all their Read more…

Saint John Chrysostom   Let us extol the grace of the Holy Spirit in spiritual hymns, since grace has, on this day, manifested itself to us from heaven. Even though our words are inadequate to Read more… 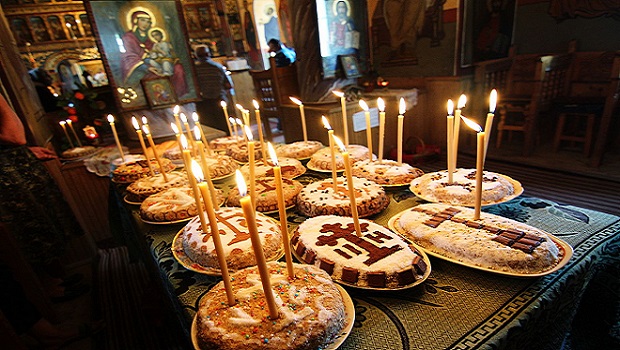 Petros Panayiotopoulos, Assistant Professor, Faculty of Theology, Aristotle University of Thessaloniki   Our holy Church offers us another opportunity to remember and honor our dead people, our beloved persons who passed away, and all her Read more…