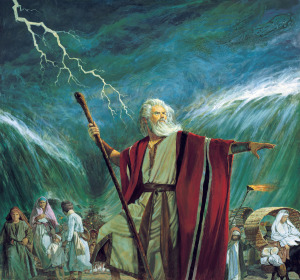 September 29, 2020 0
Like
Dislike
1 0
Welcome to The Daily Prayer Team messages, each day includes a passage of scripture, a reflection and a prayer. Sponsored by Saint John Greek Orthodox Church in Tampa, FL.
The sea looked and fled, Jordan turned back. . .Tremble, O earth, at the presence of the Lord, at the presence of the God of Jacob, Who turns the rock into a pool of water, the flint into a spring of water.
Psalm 114: 3, 7-8
Most of us are familiar with the story of the Exodus of the Israelites from Egypt, as told in the Old Testament book of Exodus. The Israelites had been held as slaves in Egypt for many years. God had told Moses to go to Pharaoh and demand that the people be let go. Pharaoh would not allow the Israelites their freedom. So God sent ten plagues on the Egyptians. As each plague was afflicting Egypt, Pharaoh’s heart would soften, and he would promise that the Israelites could leave. Once the plague had ended, Pharaoh’s heart would harden and he would not let the Israelites leave. After the tenth plague, the death of the first-born son of every Egyptian home, including Pharaoh’s son, he finally relented and told Moses to lead the Israelites out of Egypt. Moses led them out of Egypt and towards the Red Sea.
Pharaoh’s heart again hardened, and he sent his armies and his chariots after the people of Israel. When the Israelites came to the Red Sea, they realized they were at an impasse. The sea was in front of them and they lacked the ability to cross over. The Egyptian army was behind them and closing in fast. They would either be killed or re-enslaved. They felt trapped, and stuck.
The Lord made a miracle, through Moses, and divided the Red Sea so that the Israelites could pass safely through the Red Sea. Then He closed the Red Sea over the Egyptians. The Israelites, however, were not “home free.” They were going to spend nearly forty years walking in the desert to the Promised Land of Canaan. During their wanderings, they cried out with hunger and thirst, and God brought water out of a rock in order to quench their thirst. Again, the Lord had delivered them from certain death from thirst.
Many times, we feel like the Israelites. We feel trapped between a rock and a hard place, like they felt trapped between the Red Sea and the Egyptian army. We feel the army closing in, and we are stressed and concerned that we have no means of escape from certain destruction. At other times, we seem to lack basic needs, like the Israelites lacked water. We may not lack for food or water, but we may lack for joy, for companionship, for empathy, or for understanding. In many ways, the covid-19 crisis has made us feel like these desperate people of many centuries before Christ. We are not sure where the journey will end, how long it will last, or how we will pass from where we are to the “other side” of this crisis. What to do?
Keep walking!
I’m sure that the Israelites saw the Red Sea well before they reached it. I’m sure that they had moments of doubt as they approached the Red Sea. Perhaps they considered going around it, and then realized there was no time to do that and beat the speed of Pharaoh’s chariots. Something kept them moving forward. That’s faith.
Thirsty and in the desert, they could have stopped and turned back or simply given up. Some of them, in fact, did just that. But others kept walking forward, unsure of where they were going or of how long the journey would last. But they kept walking.
And that’s the inspiration for today. God provided the means for the Israelites to escape Egypt by dividing the Red Sea. God provided the means for the Israelites to subsist by making water come out of a rock, and for manna to fall from heaven. God can provide the means for us to tackle the challenges that come our way. It may be that the means are not provided in the time frame or with the outcome that we wish. The “means” might be the “means to the end,” eternal life, whether than the means to the current. We don’t know God’s ways, nor will we ever be able to fully comprehend them. Just like the Israelites. Their success, and ours, is found in making the journey, in continuing to walk forward, trusting that the Lord will provide the strength and the means for us to keep making the journey. This is faith.
Faith is not about finding the reasons for the difficult thing that happens to people, and to us. Faith is when we continue walking even when we can’t find a reason.
When Israel went forth from Egypt, the house of Jacob from a people of strange language, Judah became his sanctuary, Israel his dominion. The sea looked and fled, Jordan turned back. The mountains skipped like rams, the hills like lambs. What ails you, O sea, that you flee? O Jordan, that you turn back? O mountains, that you skip like rams? O hills, like lambs? Tremble, O earth, at the presence of the Lord, at the presence of the God of Jacob, who turns the rock into a pool of water, the flint into a spring of water. Psalm 114
Keep walking today!
The Prayer Team now has its own dedicated website! There you may find a database for past prayer team messages as well as books by Fr. Stavros and other information about his work and St. John the Baptist Greek Orthodox Church in Tampa, FL.