Stoned by Julian the Apostate: The Holy Martyr Dometios the Persian and his two disciples
Trending Stoned by Julian the Apostate: The Holy Martyr Dometios the Persian and his two disciples

He was born in the time of Constantine the Great and came from Persia. After being instructed in the faith by a Christian called Avaros, he abandoned the religion of his fathers and everything to do with his relatives. He went to the town of Nisibis, which was on the border between the Roman and Persian nations. There he entered a monastery and, once he’d been baptized, he donned the monastic habit and devoted himself to the ascetic struggle in its many forms.

But because, with the assistance of an evil demon, the monks in that monastery were envious of him, he left and went to the Monastery of Saint Sergius and Bacchus in the city called Theodosion, where he imitated the virtuous life of the Abbot, Archimandrite Ourvil, who was said not to have eaten cooked food for sixty years, nor did he sleep in a bed, and, in fact, never even sat. The Abbot gave his approval for Dometios to be ordained deacon. But when the latter realized that the Abbot had every intention of promoting him to the office of priest, he left. He went up onto a mountain where he endured the burning heat of the summer and the freezing cold of the winter, with all the miseries which the changes of weather wrought. Later he went into a man-made cave.

After he’d been there for quite a long time, he benefited those who came to him with miracles and cures, which he performed in the name of the Lord. He also turned the infidels and Greek pagans from idol worship to the Christian faith. When Julian the Apostate learned of this, when he went to Persia, he ordered that the saint be stoned. When the people he sent there to do this arrived, they found him singing the third hour, with two disciples. With a hail of stones, these blackguards crushed the athlete of Christ and his disciples, and in this way all three of them gained crowns of victory. Their feast is celebrated in the church dedicated to them which is located beyond Justinianae. 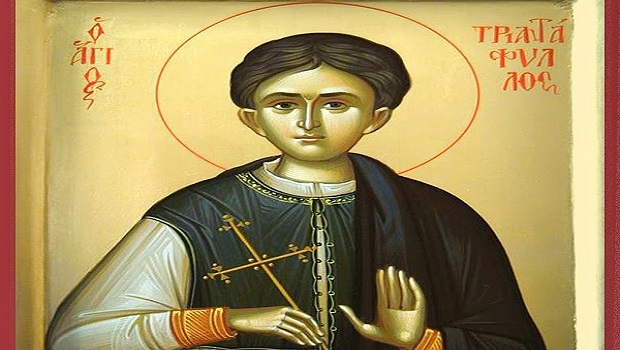 A sailor distinguished for his purity: The Holy New Martyr Triandafyllos