The Angel of the Wilderness
Trending The Angel of the Wilderness

The life and activity of John the Baptist and Forerunner is an enduring testimony in Christ, culminating in his martyrdom for Him. Just as then, when he was active in the wilderness of the Jordan, so today his voice can be heard in the wilderness of our society, since although we now have everything and live with other people all around us, we’re still far removed from God and our neighbours.

John was the first light announcing the coming of the day of the Lord and preceding the rising of the Sun of Righteousness. ‘The voice of one crying in the wilderness: “Prepare the way of the Lord”’. In the desert, this charismatic man, who proved to be ‘the greatest among those born of women’, preached in advance the message of Christ’s Gospel in only a few words: ‘Repent, for the kingdom of heaven is at hand’. Entry into this kingdom, therefore, depended on the advent of the messiah Himself, as the agent and founder of this kingdom within history. The coming of Christ and His kingdom into the world, however, also required repentance and our return to the true faith. In this way, then, the Forerunner became the preacher of repentance and a witness to the coming of Christ.

The honourable Forerunner prepared the coming of the Lord and gave a brief account of the dimensions of His redemptive work. This precursory task of John’s was sanctified and confirmed by the Triune God at the Lord’s baptism. John’s testimony is the same voice as that of the Church, calling us to recognize the Messiah in the person of Christ in the dry and arid wilderness of the present world.

There’s no lack of criticism of the secular power of Herod Antypas in John’s preaching: Herod’s immorality, his abandonment of faith in God, as well as the exploitation and depredations against the people through the abuse of his power, all to their detriment. John also didn’t hesitate to castigate the Pharisees and Sadducees, accusing them of misusing their prerogatives and of religious hypocrisy.

When speaking of the Forerunner, mention must also be made of the ascetic nature of his life in the desert which indicates and also proves to people today that we can live well on little, in contrast to the consumerist and material life-style engaged in by so many, even during the crisis we’re experiencing today. This is a crisis which has led to the glorification of matter and the ego, since we now believe that we can do everything and have everything while keeping our distance from God and other people and looking after only ourselves. This is a crisis which has led to a sense of our independence from others and God, and is a crisis that, in reality, is due to corruption, as is implied by its economic dimension, and also to the immorality of modern society.

Through his preaching, John called people to repentance, to awareness and confession of their guilt and sins. The enduring legacy of the Forerunner is his call, through his preaching, to repentance; that is, a change of mind and way of life, from the immoral to the moral, from hatred to love, from envy to joy and hence a return to our communion with God and other people. This is a testimony within our history to the true God and real life, a life of love in Christ, that is with Him and for Him, which depends on our relationship with our neighbour, who might be our brother or sister, but could equally be our enemy.

Moreover, our Lord’s saying ‘Love your enemy as you do yourself’ means that we should see the world and our neighbour as an extension of our self. It follows that we should be anxious that everyone be saved, brought to God, healed of their passions and weaknesses, restored, filled with peace and joy, because the whole world is our self and our self the whole world.

So the life and activity of the Forerunner is a testimony to and constant reminder of the kind of life we’re called upon to live as children of God. In the wilderness of our life, we’ll be asked to encounter some Herod, some Herodias, some Salome. In other words, we’ll have to face the vanity of this world, the passions, the sins, the machinations of the devil, which look to the eye to be sweet fruits but which are bitter to the tongue and have painful consequences for us.

We’re not undefended or alone in the face of all this, however: we have Christ as our guide, Who also acts as our healer and saviour. Those who live for Christ and for others are armed with the grace of God and fight the sin and wickedness of this world. Because they’re truly alive, their love extends even to death, to martyrdom for His sake, and to the defence of their neighbour, when witness becomes martyrdom.

This was so in the case of the Forerunner, who didn’t hesitate, didn’t compromise. Through his personal witness he calls Christians to a continuous witness and martyrdom. A martyrdom of blood and of the conscience. The life of Christians is a constant struggle towards perfection in Christ, fighting against our everyday problems and the difficulties of life, the temptations, passions and sin.

The Church urges us to heed the ‘voice of one crying in the wilderness’ and to ‘prepare the way of the Lord’, so that the desert may bloom, that the wilderness in which we live in modern society may flourish. And to realize that all of us can experience the kingdom of God in this world and then inherit it after the Lord’s Second Coming, as a gift in return for our life in Christ and our struggle to grow into the likeness of God. 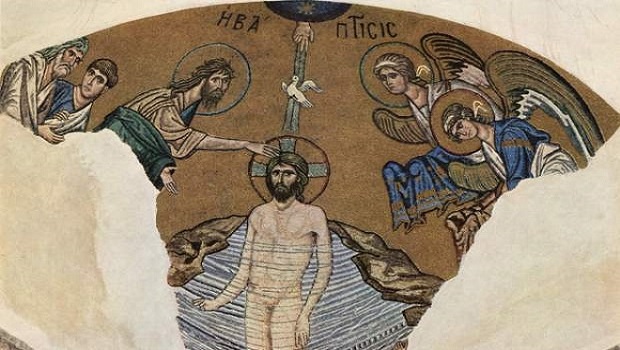 Sermon at the Vigil for Epiphany